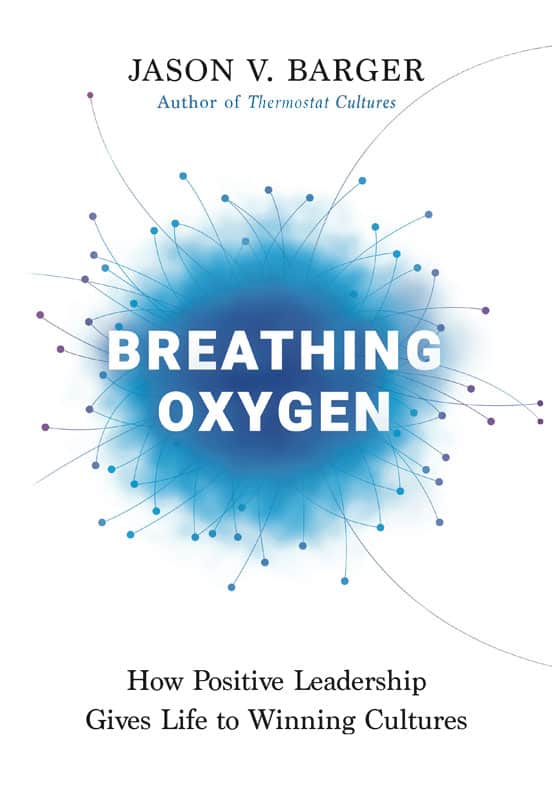 Following the success of Thermostat Cultures, Jason’s fourth book focuses on 6 key leadership mindsets that give energy and focus to individuals and team cultures. Learn how positive, healthy thinking is as essential to great leadership and building a winning culture as the air we breathe. Released in August, Available Now. An Amazon Top New Release!

Leading yourself and a team of people has never been more complicated than it is today.

As a leader, every move you make is either breathing life into your organization or slowly killing it. The atmosphere can easily turn toxic, with negativity, blame, and doubt poisoning the culture.

Just like every human being on the planet needs good air to breathe, every organization needs leadership that breathes life into its people to sustain the energy required to complete its mission.

Nine out of every ten employees say they would take a pay cut to work for a more meaningful culture. Are you breathing enough oxygen into your organization to give it meaning?

Over the past decade, leadership expert Jason Barger has advised some of the world’s biggest brands—including Deloitte, Wendy’s, Caribou Coffee, Ultimate Software, Syracuse University, Nationwide Insurance, NetJets, Kaiser Permanente, and many others—on how to engage the minds and hearts of their people.

Positive leadership and positive cultures are needed more than ever. There are people who breathe life into every relationship, room, and team, and also those who steal the oxygen and energy. Thanks to Jason for breathing good oxygen into others!
Jon GordonTwelve-time bestselling author of The Energy Bus and The Power of Positive Leadership

Servant Leadership is about giving energy and care to others and a mission greater than self. The best cultures breathe oxygen into the mindsets of their people in alignment with their values. Jason Barger’s work and spirit continue to give energy to me and countless teams in the world.
Howard BeharFormer president, Starbucks Coffee

Culture and values are the air we breathe. They are things we never stop working on, developing, and sharing with each other. Jason Barger is on target again that leaders and all associates breathe life into winning cultures!
Cameron MitchellFounder, Cameron Mitchell Restaurants

It’s clear from the research that meaningful cultures don’t just magically happen. They are co-created by leaders and people who breathe intentional oxygen into their habits, practices, structures, and operations. Jason Barger’s insights for developing leaders and cultures are foundational!
Tamara MylesAuthor, speaker, and researcher

Positive cultures lift each other up and are able to be honest and authentic, seek possibilities, and exhibit grit to find solutions. The best teams are vulnerable with each other and still find optimism for the future. Thank you, Jason!
Jeni BrittonFounder of Jeni’s Splendid Ice Creams

The mindsets we breathe every day as human beings impact the people and leaders we become in our organizations and in the world. To become more inclusive and accountable to one another, breathing good oxygen is critical. Thank you, Jason Barger!
Kevin ClaytonVP of diversity, equity and inclusion, The Cleveland Cavaliers Companies

The Latin definition of inspire is ‘to breathe life into,’ which is exactly what Jason’s latest leadership masterpiece Breathing Oxygen will do for your business, your team, and your life. Prepare yourself for a journey of personal and professional transformation.
Paul EpsteinFormer NFL and NBA executive and bestselling author of The Power of Playing Offense

Creating cultures of inclusivity, grit, and ownership that lift people up and make us all better is needed. Our job as leaders is to breathe good oxygen into ourselves and everyone around us. Jason’s message and work are contagious in the good ways!
Ken BouyerDirector of inclusive recruiting (Americas), EY

Employee engagement is a direct response to feeling loved, respected, valued, and supported. Thriving cultures are committed to supporting life-affirming environments where people can do their best work. Breathing in this good oxygen makes everything healthier, better, and more resilient.
Lachandra BakerSenior director of employee engagement and DEI, National Church Residencies

Jason highlights the key leadership mindsets behind every significant impact that is made in the world by individuals, teams, organizations, and communities: clarity, inclusivity, agility, grit, rest, and ownership. As Jason shares, our mindsets and actions impact everything.
Doug UlmanPresident and CEO, Pelotonia 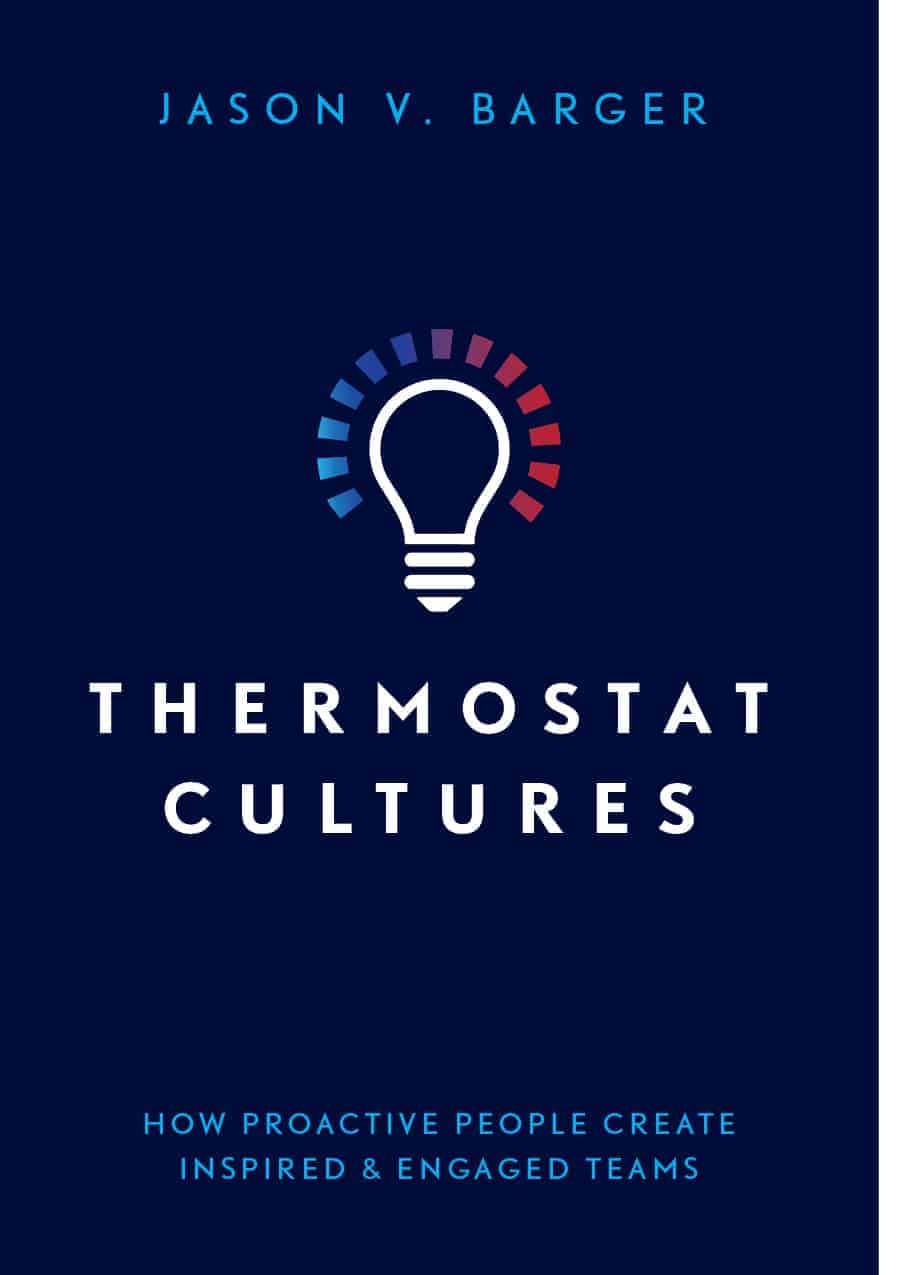 Thermostat Cultures is a must-read for anyone leading a group of any kind or for someone who desires to be a compelling participant on a high-performing team.

Every human being on the planet is a part of a team of some kind. A team at work. A team at home. A team at school. A team at your church or the community organization that you’re passionate about. Or literally, a team that is competing together on some playing field somewhere.

Why do some teams with similar talent levels succeed and others simply maintain? Why are some families more connected while others are pulling in opposite directions? Why do some teachers have thriving classrooms and others do not? Why do some companies expand with excitement and others limp along? 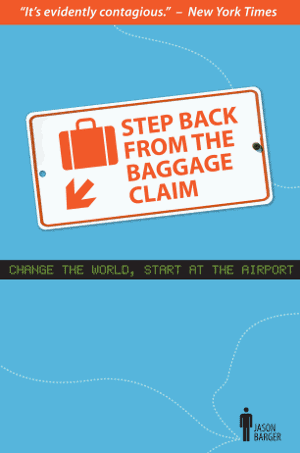 Step Back from the Baggage Claim

Jason Barger spent seven straight days flying 6,458 miles to seven different cities – without leaving the airports the entire time. He studied 10,000 minutes of observations at all four corners of the U.S. and reflected on how our airport experiences can teach us about our lives TODAY. The airport metaphor leaps to life through profound anecdotes about an orphanage in Mexico, a summer camp in Ohio, bamboo, the homeless, climbing Mt. Everest, a hotdog grill, and much more. The funny and inspiring stories remind us how to change our daily world in our personal lives, businesses, schools and faith communities! Join the movement. All four editions of Step Back from the Baggage Claim are motivational books perfect for anyone looking to impact change in their life and work. 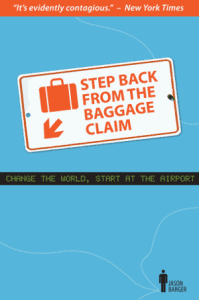 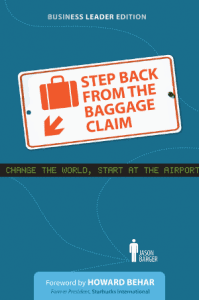 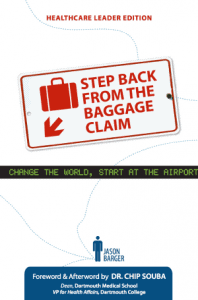 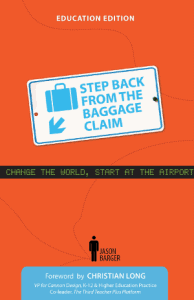 If you’d like to purchase a large number of Jason’s books for your organization or event, please contact us directly at info@jasonvbarger.com.