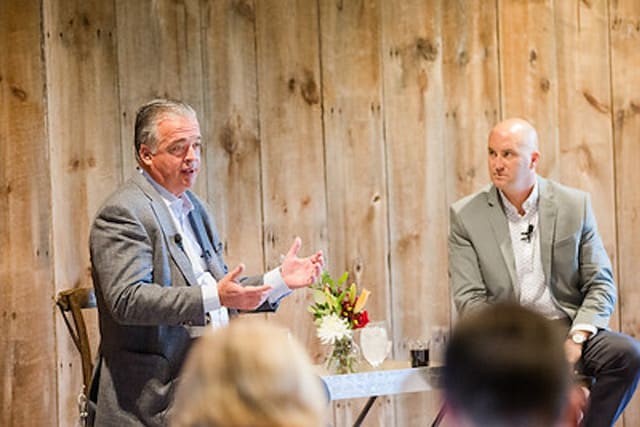 When you put “People First” and shared values into practice, success follows. Jason Barger interviews restaurant guru, Cameron Mitchell, about the culture of genuine hospitality that has led his team to 36 restaurants and 15 different concepts with locations in 12 states.

1:30 – Jason introduces the podcast. This is a pre-recorded interview from Thermostat Cultures Live 2019 and done pre-COVID. It is a reminder to go out and support local restaurants during these challenges. Jason mentions that what makes Cameron Mitchell restaurants successful are the core values they follow and people first. Purchase his book or gift cards to his restaurants here

7:42 – Cameron tells stories about his troubled youth and the difficult times he had as a young kid. His mother and father were divorced and he stopped seeing his dad, drug use followed and he even left home during high school worried that his mother would declare him incorrigible. He also tells of how he was marked most absent and also most likely to succeed in high school.

“I am diligent about writing goals”

11:15 – Setting goals is essential for success and can directly track Cameron’s own success. When he was 18 he was working at Max and Erma’s on Kenny road and during a chaotic shift change with the restaurant bustling with people he said he had an epiphany, this was what he wanted to do his whole life. He rushed home, wrote down his goals, and woke his mom up at 1 am and said this is what I want to do with my life.

13:30 – Cameron talks about his goals and how he writes down his goals on his legal pad every quarter.

14:20 – From one restaurant to multiple restaurants, it took Cameron 14 months to open his first restaurant. He tells the story of how the first restaurant started and the challenges that befell it followed by the success. CMRG has over 90 restaurants currently today all over the United States including New York City, Beverly Hills, and more. Cameron operates on a principle of trust until they prove him wrong. Trusting in people is what has lead to his great success. He says he just gives people rope and the more they ask for the more he gives.

Company culture & values is more than just a poster on a wall.

27:40 – Cameron talks about his book, Yes is the Answer. What is the Question? and his favorite “Yes” story contained within its pages.

35:30 – Cameron tells a story of how a head chef who did not meet the company culture and values by calling a female employee a horrible crass slur and how the chef was fired on the spot for the betterment of the company. It was non-negotiable. There was no backup plan or chef in waiting it was just something that had to be done for the whole team and the company. Another story is told about how the police had to be involved with a private party that was out of control and treat the staff inappropriately; the unfortunate potentiality of owning a bar.

39:10 – A revealing intimate look at Cameron’s goals for his company and his legacy and Mitchell Hall part of CSCC.

42:40 – Cameron says he lives his life by putting everything out there. He pushes everything he can out. He knows he will get much more back. He built the business for his people.

If you like the podcast, have a question, or just want to share your thoughts about daring to begin please leave a comment below or please leave a review on Apple Podcasts or Google Podcasts.

A thermostat is proactive. It sets the temperature in a room. Controls the temperature. Regulates the temperature. But in today’s distracted, fast-paced and digital world, it’s easy for individuals and organizations to act more like thermometers, slipping into reactionary thinking, becoming scattered and inconsistent. The most compelling leaders, teams, organizations, families or collection of humans of any kind operate in thermostat mode. They calibrate their mind and heart to set the temperature for the vision and culture they want to create. Jason Barger, globally celebrated author, keynote speaker, and founder of Step Back Leadership Consulting, is the host of The Thermostat, a podcast journey to discover authentic leadership, create compelling cultures and find clarity of mission, vision, and values.